Sparkling final round not quite enough for Dean & Gareth
Read More...

Despite the fact it was the wettest day of the year Thetford Golf Club's Mixed Open was a great success with some fine golf produced by the field of 64.

It was tight at the top as Colin & Jacqui Rust from Gedney Hill in Lincolnshire pipped Roger & June Meadows from Barnham Broom on countback. Both couples had come in with 41pts, but the Rusts won the day with a back nine of 22pts.

A total of 23 different Clubs were represented from all over the country, including a grouping of one couple from Chippenham in Wiltshire alongside a pairing from Knaresborough in Yorkshire. 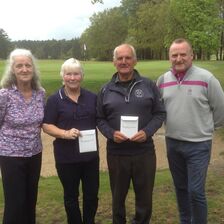